As It Happens6:30Moncton organist pumps up crowds at the World Junior Hockey Championship

Lynden Steeves is pumped to play the organ at the World Junior Ice Hockey Championship in Moncton, N.B., bellowing tunes throughout each game in his shiny red suit and sock feet.

Steeves is the organist for the Moncton Wildcats, a junior hockey team in New Brunswick. And last month, just about two weeks before the first puck drop, the World Juniors called him up for the games.

The organist has been surprising hockey fans, in the arena and at home, with his twist on classic hockey tunes. On Saturday’s game between Slovakia and Switzerland, he serenaded the crowd with music from the Addams Family, Dr. Dre and The Weeknd.

Sometimes I’ll throw a little Mission Impossible when the team’s down by three or four goals and they get a comeback.– Lynden Steeves, organist

Steeves spoke with As It Happens guest host Helen Mann in between games at the Avenir Centre arena. Here’s part of that conversation.

What has it felt like for you to be [at the World Junior Championships]?

I never thought in my dreams that I would actually be here playing for the World Juniors. It all happened so fast and I couldn’t be more honoured to be selected to do this.

What was it like for you to hear the organ you were playing, belting out on this World Junior stage the first time?

I started to play Hockey Night in Canada and you heard the bit of a roar throughout the crowd and then the murmur, because, you know, not a lot of people were expecting to hear this big, thunderous organ. And when I first played that, it was just … really cool to play that in front of, you know, [7000 to] 8000 people.

Yes, of course. I usually get nervous before every game, whether I’m doing it for the Wildcats or the World Juniors.

You get a few jitters before the game. But as the game goes on, they kind of wear off and I’m able to have a lot more fun.

Canada, seen above celebrating in a win over Austria on Thursday, defeated Sweden 5-1 on Saturday at the IIHF World Junior Hockey Championship. (Darren Calabrese/The Canadian Press)

Now, just from what you’ve said so far, I gather this is not an ordinary organ. It’s got some bells and whistles, is that right?

Oh, yes. It’s got all the bells and whistles. It was custom made by Allen Organ [Company]. And it’s a replica organ of the same one that’s used for the Detroit Red Wings by Lance Luce.

Lance came down in late summer and was able to put some presets into the organ for whoever was going to play it…. I can still customize it to what I want it to sound like, but Lance was a big help in getting me started with this.

Was there a big learning curve for you?

Kind of. It wasn’t so much playing in front of crowds…. The learning curve was more so the timing. Also, playing with my feet.

I never really played a lot with my feet. I did when I was a kid playing a little, small organ with just one scale. This one has two for bass pedals. So that was probably the biggest challenge … being able to get the bass notes in there at the correct time, with both hands going at the same time.

There is kind of a repertoire of the kind of music that gets played at hockey games. Do you have favourite tunes you like to play?

Well, all of them are my favourite. But when you come out with Crazy Train or Thunderstruck or I’ll play the Universal Theme song or something like it’s the start of a movie, you know, everybody seems to be like ‘wow’ … just because they’re not used to hearing this kind of style of music.

Do you have any surprises you slip in there?

Sometimes I’ll throw a little Mission Impossible when the team’s down by three or four goals and they get a comeback. 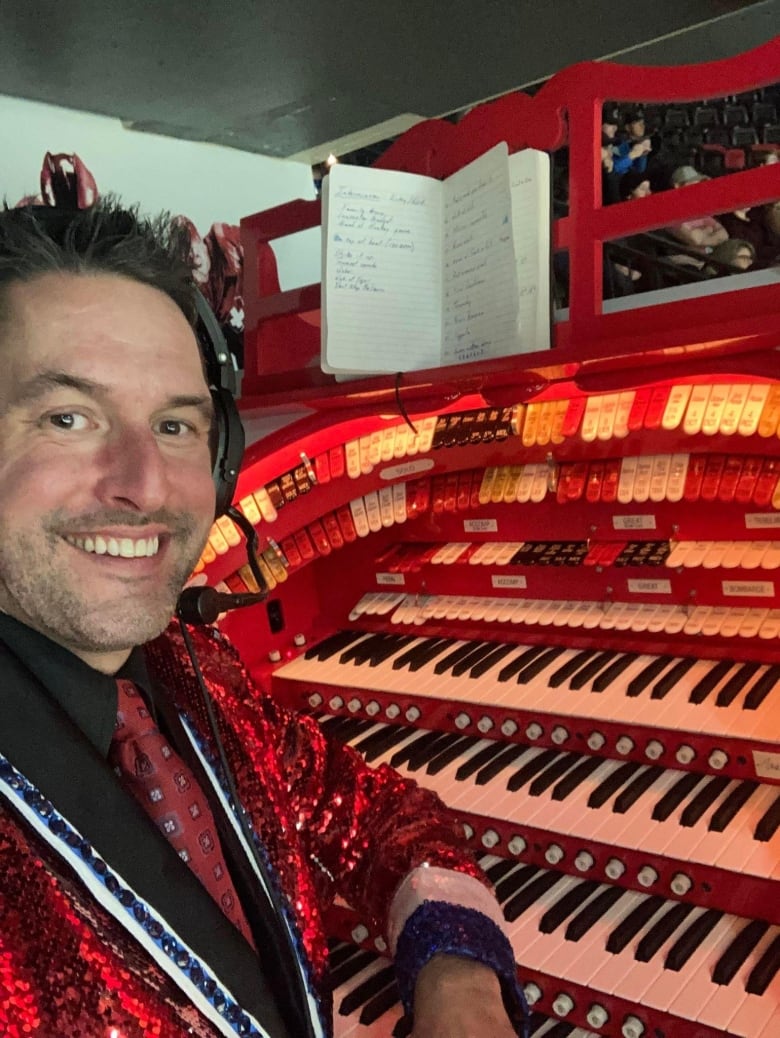 During the World Junior Hockey Championship, Lynden Steeves plays a custom-made organ by Allen Organ Company with ‘all the bells and whistles.’ It is a replica of the same organ used by Lance Luce for the Detroit Red Wings. (Submitted by Lynden Steeves)

You’re getting ready now for the U.S. versus Germany game. How do you pump yourself up for that?

I do a lot of sets around the arena, so I just walk around and normally I’ll warm up for about ten, 15 minutes and make sure my sound levels are okay with the sound guys — who do a great job, by the way.

And then, you know, right now where there’s so many people here, a lot of people like to get their picture taken with me because I am in a flashy suit. So I don’t go unnoticed around the arena.

What are you wearing?

It was custom made for me for the Wildcats and it’s red, blue and white. So it’s kind of fitting for the international colours, especially with USA being the home team here at the Avenir.

So you sound like you are a hockey fan. Do you ever actually get to see much of the games or are your eyes on the organ all the time?

I watch the whole game. I’m very in tune with the game and I grew up with a hockey family, played hockey and my boys are in hockey.

What do your boys think?

They’re thrilled for me. And they come up with big smiles when they get to come to the games.

My oldest boy actually works for the rink here so he gets to see me every game. He’s the guy that goes out in between whistles and cleans the ice.

So it’s been pretty neat for him and everyone else in my family to be able to watch me.