Moncton meals truck provide will get just one chunk

Moncton’s efforts to get food trucks downtown for the summer has led to only one food vendor taking up the city’s offer.

May O’Brien, who has had Bangkok Food Truck in Riverview for about two years, is now setting up on Main Street, across from City Hall, on Mondays and Tuesdays.

Michel Uberall, who recently set up a German food truck on a private lot on Mountain Road, says the city charges too much to be located downtown. (Marc Genuist/CBC)The city is still hoping others will come forward, but at least one food vendor thinks the rules need to be changed first.

“I would love to go downtown. It’s just not going to happen,” said Michel Uberall, a German chef, who opened a German food truck about a month ago on a private lot on Mountain Road.

Uberall says the city is charging too much to be downtown — about $4,000.

“And the time you make money, I think it’s at night time, and [under the current rules] you have to shut down at 8 p.m.,” he said.

City clerk Barb Quigley says the city charges a licensing fee of $1,200, plus $200 a month for the parking space.

That’s lower than what is charged in other cities, she said.

But Quigley also noted it’s a pilot project and that the rules will be reviewed in the fall. 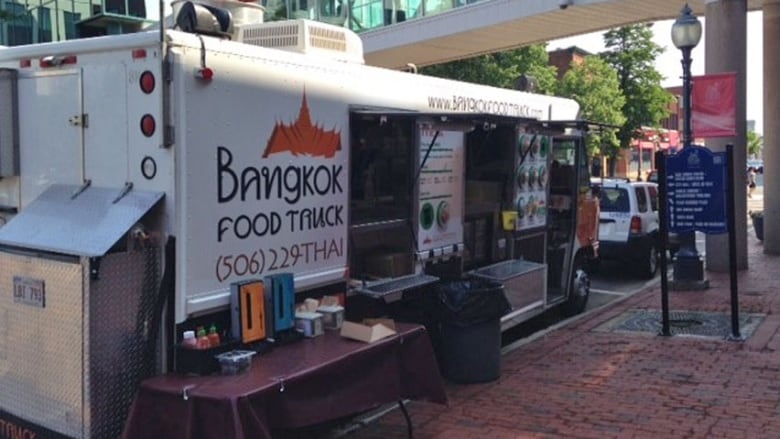 The Bangkok Food Truck is the only one that has set up on Moncton’s Main Street so far. (Marc Genuist/CBC)Some people wanted to see as many as six trucks, while others didn’t want any food trucks competing with downtown restaurants.

In the end, council decided to allow three food trucks to set up across from City Hall for the summer.

“We had a lot of interest,” said Quigley. “We received calls from 10 or 11 different vendors, but for the time being we have only one who has taken the bite,” she said.

“We would like to encourage people who are thinking about this to give us a call because I personally have been to a lot of other cities where they have the food trucks and they’re a great addition to the downtown and I think they will attract a cool vibe for our community.”