MONCTON – The operators of a popular food truck in Moncton say they are considering leaving the area because of the racism they say they face on a daily basis.

Michael Uberall is the owner and chef of the Checkpoint Germany food truck, which he started with his partner, Shelley Bastarache, last summer.

Since that time, they say they’ve faced regular racism and harassment.

“People showing me the finger, telling us we don’t speak their language,” Uberall said. “They told me to go home to Germany and swearing at [me], using the F-word. It’s on-going and on-going. For me, it feels like I’m going to war.”

Uberall is originally from the Frankfurt area of Germany, but has been living in Moncton for eight years. Now he and his partner are thinking about leaving the area.

This past weekend, they had their food truck at the Sappy Festival in Sackville. He said he arrived back Sunday morning to find “Nazi S–t” written in chalk in front of the truck, with an arrow. He said it’s becoming very difficult to take. 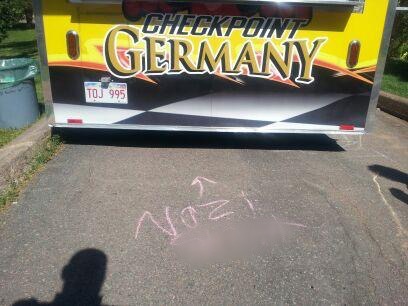 “I did my business plan in order to get my numbers together and there’s one important thing I forgot to think about and that’s racism,” he said. “I have to go somewhere where people know and appreciate what we do, because it’s just not here.

“I did do that in order to bring some culture here and show people how we live, how we eat, what we think. Yes, I am from a different culture, but still I’m trying to adapt, but it takes both sides to adapt.”

Uberall believes he is being targeted because he doesn’t try to hide where he’s from, and his truck has “Germany” written on it. He was visibly emotional when he spoke with Global News.

Bastarache grew up in the Moncton area and said she hadn’t realized racism was still a problem, until they began the food truck. She said she worries people in the community don’t understand how serious the problem is.

“They’re like brush it off. Don’t worry about it. It’s just a bunch of jerks,” she said. “I’m like, no you guys don’t understand that this happens on a regular basis.”

She said it has been taking a toll on both of them.

‘A few of them don’t have a lunch’: Moncton charity requires donations to feed youngsters – New Brunswick