New Brunswick’s minister of Social Development says the Moncton Lions Community Centre on St. George Street will open Monday, but only as overflow space because the province believes there’s enough capacity at three other locations.

“We don’t want to create an expectation that the new St. George Street shelter is unlimited in its capacity,” Shephard said in an interview Wednesday. “We are going to utilize it for overflow and and that will be how it will be run.”

Moncton council voted to use the city-owned building as a shelter, with up to 125 beds, on the understanding there is insufficient capacity in existing shelters for hundreds living outside or couch surfing.

Tents to be used as ‘last resort,’ says minister

Last week, city staff said the building wouldn’t be ready to use as a shelter until early January. Large heated tents with cots were expected to be used starting Monday until the building is ready.

Moncton has set up a large tent behind the city’s Lions Community Centre building on St. George Street. The heated tent was expected to be used as emergency homeless shelter space until January. (Pierre Fournier/CBC)

A large tent was erected behind the community centre Wednesday. But Shephard now says they don’t plan to use it because the building will open sooner.

“They are a last resort should should we not be able to be in the Lions Centre,” she said.

Shephard said the province now believes there is sufficient capacity to meet the need in the community, despite figures given last month by frontline agencies.

YMCA’s ReConnect street outreach service said in November it had counted more than 550 people living outside or couch surfing.

Trevor Goodwin, senior director of outreach services for the YMCA of Greater Moncton, said the list was cross-referenced with the names of people already using shelters, in order to avoid double counting.

Enough capacity in the system

Her department told CBC that 59 people stayed at the House of Nazareth where there’s capacity for 94, 59 others at Harvest House which can sleep 65, 34 more at a new shelter on Mark Avenue with 60 beds, and 70 in a temporary shelter at St. George’s Anglican Church.

The church shelter is expected to close Monday. That would leave a total capacity of 219 beds at three shelters, with the community centre opening if more beds are needed. 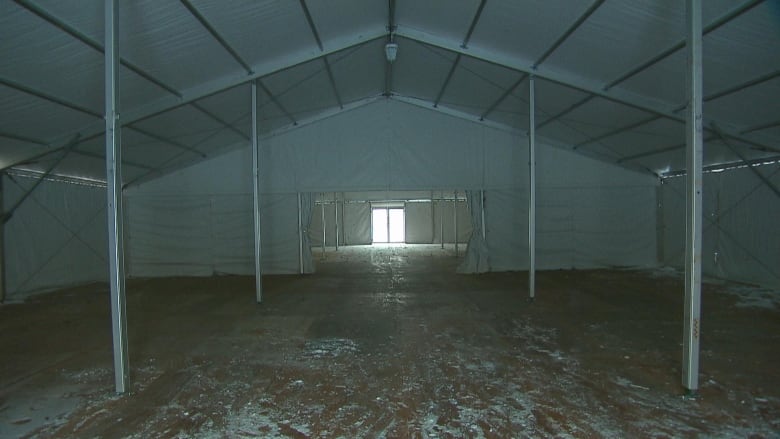 The inside of a large tent set up behind the Moncton Lions Community Centre on Wednesday. (Pierre Fournier/CBC)

It’s unclear if the province attempted to count those also living outside, or whether it accounted for people banned from Harvest House and House of Nazareth.

People who have spoken to CBC have previously said they avoid existing shelters for various reasons, including the amount of violence and because they’ve had belongings stolen.

Another change relates to a shelter set up in the Moncton Lions Club building on Mark Avenue. It was previously expected to open to offer beds during “extreme weather,” something Shephard referenced again in the interview Wednesday.

Goodwin and Moncton staff had said that plan wouldn’t be enough to meet the community’s need.

“That still doesn’t satisfy our 556,” Jocelyn Cohoon, the city’s director of recreation, told reporters Nov. 28 with a reference to the count of people not using shelters already. “So that’s why we’re looking at this fourth option” at the community centre.

After Shephard spoke, department spokesperson Robert Duguay told CBC the shelter will be open daily until the end of April, not just during extreme weather.

The City of Moncton did not provide a comment late Wednesday about the changes in plans Shephard spoke about or the figures the province is now relying on for its planning.

The city had previously said it was still in the process of deciding who would run the shelter at the community centre. Shephard indicated Wednesday an announcement about that would be made by the end of the week.