Codiac Regional RCMP issued a warning Thursday after responding to nine calls in 24 hours because people in the Moncton area had overdosed “on what is suspected to be fentanyl.”

“There are some extremely dangerous and even lethal drugs in circulation and there’s no way to know if what a person is consuming may contain one of them,” police said on Twitter.

The RCMP did not say whether any of the overdoses were fatal, only that Narcan had been used to counter the effects.

Debby Warren, executive director of Ensemble Moncton, understands that nine overdoses in a 24-hour period sounds like a lot, but she suspects it’s just the tip of the iceberg.

The charity offers harm-reduction services to drug users, including a needle exchange program and an overdose prevention site.

Judging by the number of Narcan or Naloxone kits her group hands out, Warren believes the rise in substance use and overdoses has become a health-care crisis.

“We pass out Naloxone kits to the people we serve, and since Dec. 4 we’ve gone through 300 of them,” she said.

“That’s a lot of kits being distributed and a lot of individuals that are using it to reverse overdoses and calls not necessarily being made to 911.”

Warren has seen first hand what can happen when someone overdoses and there isn’t support for them as they recover.

“We need to recognize that it’s a health situation and we cannot be turning them out because we don’t like what they do or we don’t want to see what they do,” she said.

“We know that consequences can be dire — we’ve already experienced that in our community and I just pray and hope that we don’t have to experience it again.”

Luke Landry died outside Moncton city hall in November. He had overdosed at Ensemble Moncton’s overdose prevention site earlier in the day, but no shelter was able to take him in that night.

Warren wants to see one of the emergency shelters in Moncton offer an overdose prevention site, so people who are homeless and using can be supervised and have clean supplies.

Currently Ensemble offers the only overdose prevention site, and its hours are limited. 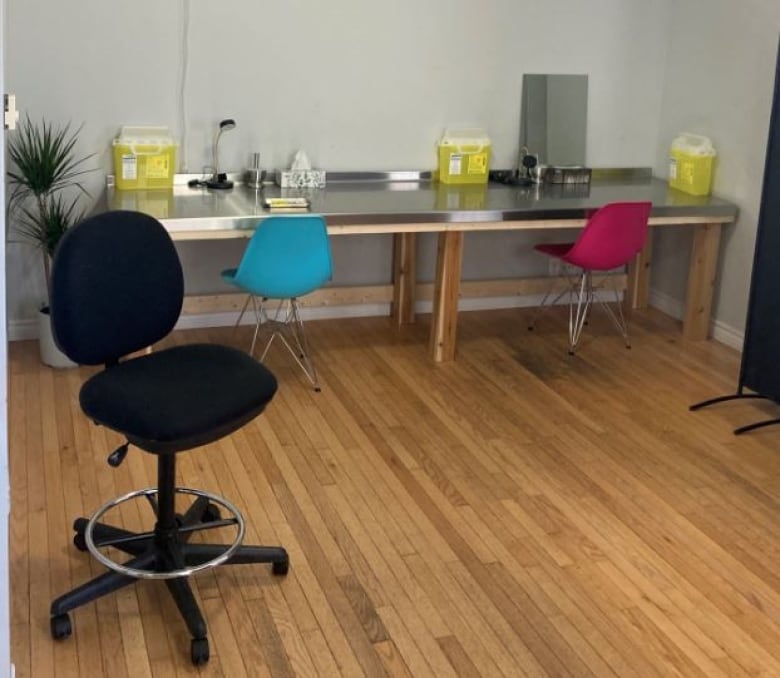 Ensemble Moncton offers the only overdose prevention site where people are able to inject drugs in a safe and supervised environment. (Submitted by Debby Warren)

“They need a safe place to be, they need to not have service restrictions because they’re under the influence,” she said.

“We cannot put people out into the cold under the influence.”

Earlier in December, Public Health warned the drug bromazolam had been detected in the blood samples collected in nine sudden death investigations between July and November.

Dr. Yves Léger, the acting chief medical officer of health, warned that it was the first indication the drug was being used in New Brunswick.

“What is especially concerning is that people do not know it is contained in their street drugs,” he said in a news release on Dec. 9. “There are no warning signs of bromazolam’s presence, as it cannot be detected by sight, smell or taste. There are no telltale signs.”

Warren said while Naloxone can reverse the effects of an opioid, it has no effect on a drug like bromazolam.

Public Health advises people who use illegal drugs not to use alone, to go to an overdose prevention site when possible, and to begin with a small amount to check the strength of the drug.

Meals vans motor out of downtown Moncton searching for enterprise